The second season of ‘You‘ starts cool and ends with a killer BANG! Typical You style.

It’s the same Joe, but with a new name, in a new town and with new tricks up his sleeves. You tries to reinvent itself without having to lose all of the things that made it such an awesome hit in the first place. Luckily, it pulled it off.

Last season ended with Joe’s ex, Candace, return to life with a personal vendetta against him. To escape, Joe runs to Los Angeles, a place he knows Candace knows he hates and promises to turn a new leaf. Expectedly, this doesn’t hold up as he soon finds his new YOU to pine over – Love Quinn. Joe finds himself thrust into the extra-eventful drama that is life with Love, her hippie brother, Forty, and the rest of her family and friends.

Love takes an interest in Joe and, although he tries to fight it off at first, he succumbs to his desires and a romance kicks-off between them. To further prove himself worthy of Love’s love, Joe befriends Forty, who’s trying hard not to be seen as the crazily rich drug-addict posing as a writer. Although their friendship starts flawed, it quickly morphs into something genuine before the climax of that explosive finale.

Joe (as Will) tries to stay true to his sobriety, even after his cover is exposed by Candace’s arrival in L.A., but it’s like no matter how hard he tries to cover up the universe always finds a way to bring the real him out.

In Love, Joe finds a perfect partner, someone fighting her own demons and is willingly accepts him for who he is, but with a surprising twist, an unplanned baby on the way, a new life and a new neighbor to obsess over, the real question is, how long will Joe’s victory last?

Netflix has done greatly in creating awesome contents that it definitely deserves its own category, even after the general one. In no particular order, here a list of what I believe are the top 10 Netflix series.

PS: This list is mostly based off the numerous shows I watched from the numerous offerings of the streaming giants. And, every show here released, at least, one season this year.

Bold and uncompromising. Director Ava DuVernay gave the Central Park 5 men a new voice at a time like this and we love her for that.

Otis + Maeve = Together forever in my head.

This is one show with lots of magic props and spells that still manages to not be in your face. It might not be the biggest hit from Netflix, but it’s definitely one of my favorites.

The last of the Netflix-Marvel shows, the third season of Jessica Jones ends this corner of the MCU on its own terms, just like its eponymous lead does everything else in her life. Really, what else would you expect from someone who says “Giving a shit sucks”?

Payton Hobart is wealthy and wants nothing else but to be the President of the United States. Ring a bell?

The show finally grew pass Hannah Baker, but still couldn’t really escape her. I guess she’ll always be a part of the show as long as Clay, Justin, Jessica, and the others live.

One of the biggest shows this year, in the side of the world. Another testament to the fact that language isn’t a barrier to enjoy great content.

10. A series of Unfortunate Events

This show is hilariously stupid. Neil Patrick Harris as the wicked Count Olaf is a delight to watch, with his silly disguises and gimmicks. The show is over, so now’s a good time to binge all three seasons, if you haven’t yet.

‘You‘ is weirdly named. So, one might think. But once the tape gets rolling, it wouldn’t take a branaic to figure out why it’s rightly so. It’s not everyday your protagonist is a functioning psychopath, and the narrator of his own story.

Joe Goldberg is a bookstore keeper, and a content one at that. His life’s simple, as were made to believe, until Guinevere Beck walks into his store (and life). He believes it’s true love, hence must have her. This drives him to doing whatever’s imperative to make their love going; this includes keeping whoever poses a threat to their continued love at Bay, by any means necessary (including murder). 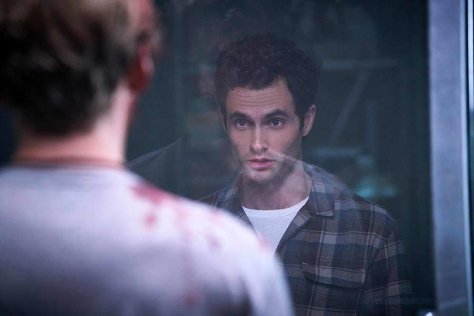 It’s weird how far someone would go to propel a relationship (love) that doesn’t legally hold up in court. It’s clear from the onset that Joe is sick upstairs. Certified mental imbalance. But with the way the story progresses, you’re drawn into this mind of this crazy man, who, unfortunately for the ladies, is also a sweet, hopeless romantic, and you can’t help but see reasons why he does the crazy things he does. He’s crazy. 🤣. The story is one about obsession and boundaries. And how to be thankful if you don’t have one who dotes over you in such manner.

Penn Badgley does a terrific job at bringing Joe to life. Not one with many acting credits, but his performance on this show shows a side to the actor his six years as Dan Humphrey on The CW’s Gossip Girl never did, thereby showcasing his great range as an actor.

You is a good show. Not great, but good. The story’s decent; I mean, who wouldn’t want to get into the mind of a passive psychopath? But I also feel it dragged for too long; a shorter, tighter episode order would’ve worked in favor of the story. A shortcoming I hope they fix next season.

The acting is good; pretty decent for a show whose most popular face was a star in a CW show. Peach Salager is my favorite character; a pity she didn’t get to hang around long enough for me to enjoy more of her nasty attitude.

One thing I didn’t like about the show are the many moments of questionable character actions. You see characters making silly decisions not feasible in their present situations. It’s many, yes; but it isn’t enough to turn you off from watching. The shows a real thriller. If you were sitting on the fence about watching, I hope I’ve given you enough details to make a decision. It even ends with a cliffhanger, if you’re into such. 😉

PS: A second season has already been commissioned; this time, it’ll be airing on Netflix.