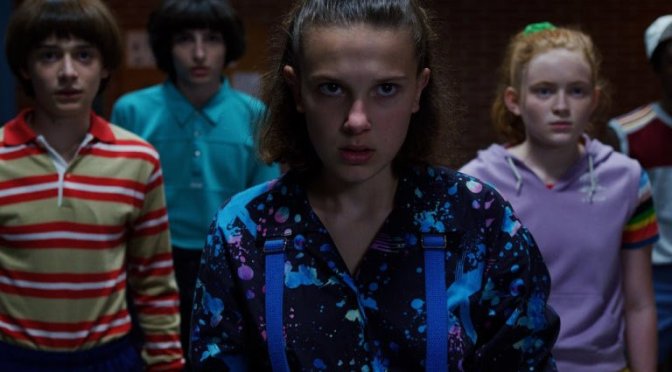 Netflix has done greatly in creating awesome contents that it definitely deserves its own category, even after the general one. In no particular order, here a list of what I believe are the top 10 Netflix series.

PS: This list is mostly based off the numerous shows I watched from the numerous offerings of the streaming giants. And, every show here released, at least, one season this year.

Bold and uncompromising. Director Ava DuVernay gave the Central Park 5 men a new voice at a time like this and we love her for that.

Otis + Maeve = Together forever in my head.

This is one show with lots of magic props and spells that still manages to not be in your face. It might not be the biggest hit from Netflix, but it’s definitely one of my favorites.

The last of the Netflix-Marvel shows, the third season of Jessica Jones ends this corner of the MCU on its own terms, just like its eponymous lead does everything else in her life. Really, what else would you expect from someone who says “Giving a shit sucks”?

Payton Hobart is wealthy and wants nothing else but to be the President of the United States. Ring a bell?

The show finally grew pass Hannah Baker, but still couldn’t really escape her. I guess she’ll always be a part of the show as long as Clay, Justin, Jessica, and the others live.

One of the biggest shows this year, in the side of the world. Another testament to the fact that language isn’t a barrier to enjoy great content.

10. A series of Unfortunate Events

This show is hilariously stupid. Neil Patrick Harris as the wicked Count Olaf is a delight to watch, with his silly disguises and gimmicks. The show is over, so now’s a good time to binge all three seasons, if you haven’t yet.

Google has released its list of most searched TV shows of 2017.
The list is nothing short of predictable because most of the shows there were among the biggest hits of the year. There were also a few surprises there, shows that capitalized on controversial marketing campaign to earn themselves a spot of Google’s searches all over the world.

Google has released its list of most searched TV shows of 2017. The list is nothing short of predictable because most of the shows there were among the biggest hits of the year. There were also a few surprises there, shows that capitalized on controversial marketing campaign to earn themselves a spot of Google's searches all over the world. From least to most, you have the list below: 10. American Gods 9. Big LITTLE Lies 8. Santa Clarita Diet 7. The Good Doctor 6. Bachelor in Paradise 5. Riverdale 4. Iron Fist 3. This Is Us 2. Game of Thrones 1. 13 Reasons Why Do you agree with Google? Which of these entries surprises you the most? Do you think GOT should have been number one? Do tell. #AmericanGods #BigLittleLies #SantaClaritaDiet #TheGoodDoctor #BachelorInParadise #Riverdale #IronFist #ThisIsUs #GameofThrones #13ReasonsWhy

From least to most, you have the list below:

Do you agree with Google?

Which of these entries surprises you the most?

Do you think GOT should have been number one?

This is the story of Hannah Baker, her suicide, and why she decided to kill herself.

In recent years Netflix has been known for a long of magical contents when it comes to TV programs; 13 Reasons Why is the latest in their long list of awesome series to follow.

Hannah Baker is your average high school girl, glamorous, beautiful, in need of fun. She’s also naive, makes some senseless life choices, the full package of what life in high school can be. The sad thing about this story is that it starts with Hannah Baker dead, the rest of the story revolves round the reasons why she killed herself; or better still the people whose actions are the reasons for which she killed herself.

It’s a whole new perspective to hearing the side of a victim, more so one of intense bully that led to death (by suicide). Hannah’s decision to end her life doesn’t really come as a shocker because that’s the first thing the show throws to our faces, but as the episodes go by and we’re more invested in her life and the rest of Liberty Junior High School, we can’t help but wonder why she’d feel suicide was her best option. I’m forced to believe her mental health was questionable. 13 Reasons Why touched a lot of things that are prevalent and wrong with teenagers: intense bullying in schools, rape, peer pressure, what true friendship means, the concept of teen love, amongst other topics. The character of Clay Jensen is a perfect example of how loving someone but not able to read the signs that something’s intensely wrong. Clay loved Hannah, I could tell from the first episode, but he said nothing for a long time, stringing her along as she become the item of caricature in school because everyone believed her to the new girl who’s easy to get; everyone wanted a share of her. Clay could tell but he did nothing to stop it. More of Clay’s reactions to threats in his immediate environment are in his head, a case of what could be if only he makes a move. But he doesn’t.

There’s the truckload of friends who in their own different ways let Hannah down – There’s Jessica, Zack, Alex, Justin Foley, and co. Some contributed immersely in sending the fragile girl to an early grave, while for some doing some things a little different could have changed the outcome of things, and for others staying behind doing absolutely nothing sealed Hannah’s fate. A perfect example of the latter is the school’s counseller.
Then there’s another aspect of society the series also touched – How hard involved parties try to salvage their reputation, even if it means spitting on the memory of the deceased. The management of Liberty High hiring a very expensive law firm to represent against Hannah’s grieving mom’s accusation that the school did nothing to prevent her daughter from being broken emotionally. The school shows unapologetically its effort to portray itself as an all round secure space for students even though it’s not all true.

Hannah’s death takes its toll on a lot of people most notably her mother, Clay, and Tony. All have to live knowing that one way or the other they let her down, and that doing something different might just have saved her life. There’s lot of emotional scars on people Hannah leave behind, raised higher by the tapes to haunt then even from the grave, validating the saying that death doesn’t happen to you but to those you leave behind. We watch as Clay loses his sense of living and grasping reality from his make-believe fiction. We also watch as other characters like Tyler and Alex take actions in response to the bullying they also face at Liberty High.

All these talks about bullying and suicide makes High school seem like a scary place, but it’s still a beautiful space to grow. Taking your life isn’t the answer, it solves nothing. Hannah is dead, yes, but the lives of everyone she left behind both those she loved and those that taunted her are all screwed up. Nothing’s going to be the same.

Now that the series has been renewed for a second season we can see how much the other character’s lives are affected. People like Tyler (who’s stockpiling weapons for whatever reason best known to him), Alex (who shot himself in the head).

13 Reasons Why is available on Netflix.